Imagine God like a painter. See him choosing his canvas and painting the world as he likes it. See him stepping back and admiring his own choices and the work he’s creating. He looks at it and admires it, it is good. And He smiles.

Then he sees the unexpected, the lifeless becomes alive and the woman he had created steps out of his canvas and she jumps into another one. A blank one. And she starts to paint it herself. It changes his canvas. Of course, he is upset, he frowns. His lifeless puppet, his creation didn’t obey him but started painting instead on a new canvas in which the borders are not defined. They are blurry and messy. Eve motions a change that can’t be reversed. The new canvas is one of blurry lines, less perfect colors, messiness, unfinished yet it is alive. She has cut the steering ropes of her master, she is running free. She sees the difference of good and evil. God steps back. She takes over. She is mastering her world. She creates and she teaches her children. She passes on her knowledge of good and evil. She passes it on. And they stayed united. 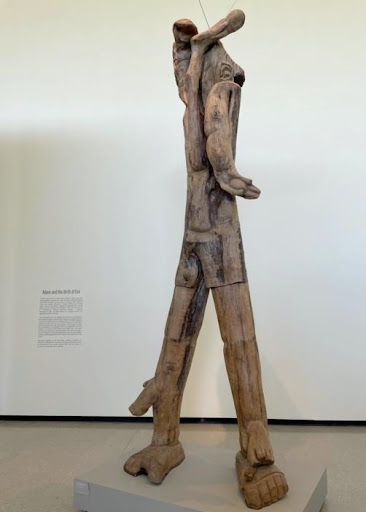 Eve as a Goddess, as a heroine. That story has not surfaced in our collective memory. I do believe in that untold story. And I believe that a portrayal of Eve in a way similar like this has been done by the African sculptor Jackson Hlungwani (1923-2010). I saw the work at the Norval Foundation this year January in Cape town. It is a strange image. It’s elongated, very long and stretched. You have to look up, and even when you are stretching your neck and standing on your toes you can’t really see what is going on. The characters are hidden amongst themselves in the wood. You actually would like a ladder to climb up, so you can study the top part and discover who is who and what they are doing.

And it’s not only Adam and Eve who are portrayed in this image, but her two children Cain and Abel are mingled in it too. This makes it a very extra-ordinary portrayal of the bible story because the story tells us the brothers are separated. Cain has killed his brother and he is punished by God and exiled from his homeland.

The accompanying text at the gallery poses the question: “if it was maybe Hlungwani’s intention that these archetypal entities be pressured together by the divinely imbued wood and the legacy of ancestors, to reconcile with one other?”.

Reconciliation implies evil has been done. Yet, I wonder, couldn’t Hlungwani have envisioned here another story? The story wherein Eve after giving birth to free choice also stepped in creating a path of possible living peacefully together. She may have taught her children to not fight each other?

In this sculpture Eve is holding an egg in the one hand and in the other hand she holds a sphere. The eggs are symbol for Hlungwani to be gentle with each other. The accompanying text suggests this sphere is symbol for the ‘evil’ apple. However, if we see the apple as the birth of free choice it loses some implications with evil. Now it has become the beginning of humanity. Eve choose to not be a puppet of God but a human woman. With it she created our human world. Full of mistakes and missteps, but real. In the history of this story our understanding stopped at the fact that we have evil and we now have to deal with it afterwards. However, a different version of this story could be that by knowing and being aware of evil (Genesis 3:22 And the Lord God said, “Behold the man has become like one of Us, knowing good and evil …]” we can then yield that knowledge and prevent evil from happening.  This version never got imagined. The only version we imagined through history is the one of reconciliation. However, this does not give us the power to prevent evil. Which would be a much more powerful way to live life.

Looking at the title of Hlungwani’s sculpture:  Adam and the birth of Eve, I believe the sphere does not portray the apple Eve ate, the birth of evil, but rather it is a symbol for our perfect world which is a possibility. That perfect world is difficult, yet Hlungwani wanted maybe us to believe it is possible. As we are aware of good and evil, and we are finding ways to prevent evil to happen. This is difficult. Is it maybe more difficult then reconciliation? This could be why Hlungwani made this sculpture so difficult to look at, to perceive. You have to stretch yourself to see the stretched persons in the work. This is the birth of Eve, a new Eve, a new person, one who can change our world: again. The birth of a new story.